“What I have been driving at all along is an explanation of why I want to go back to Africa again and again. It is because I discovered in Africa my own true importance, which is largely nothing. “
-Robert Ruark

My old Ruger was rock steady on a tree limb fork and if the blesbok would be so kind to move into the open and not be lined up with another I might finally get a shot.

Limcroma Safaris donated a hunt to our 2020 fundraiser and I was the successful bidder ‘from the floor” which consisted of me and board members Mike Hoskins, Brian Medcalf, and Jim Houthoofd. Ron Mcguire announced the auction item/description and Art Smith performed the virtual auction “live”.

A new experience for all but it came off without a hitch!

I’m normally one and done with the majority of big game animals and had previously collected most of the available animals found in the Limpopo region of South Africa. White blesbok and Limpopo bushbuck were exceptions and animals I wanted to hunt in addition to the zebra and warthog included in the donation package.

The White blesbok is seldom the subject of safari stories. It is a horse-headed, medium-sized antelope with high shoulders and a nearly white pelt. Like the common blesbok, its head is crowned with lyre-shaped ringer horns that curve back in shallow S’s. Blesbok live in herds and after spotting a number of them we parked the truck, grabbed the trigger sticks, and started walking in the best Steward Granger tradition.

The terrain was good for stalking; open enough to watch the herd, and enough cover to stalk them. After playing cat and mouse for the better
part of two hours we had closed within 200 yards. The rams were starting to rut and were fighting in what appeared to be a playful way. One ram was considerably larger in body and horn and we patiently waited for a shot opportunity. When it finally came clear I used a tree limb for a rest which is something I have not done in many years.

The chosen ram went down at the crack of the .270 but his head was still up which could be a problem so I chambered a round, set the safety, and closed the distance. He jumped up and took off and a follow-up shot put him down for good! There was definitely no ground shrinkage with this guy. He will no doubt measure very high Gold. 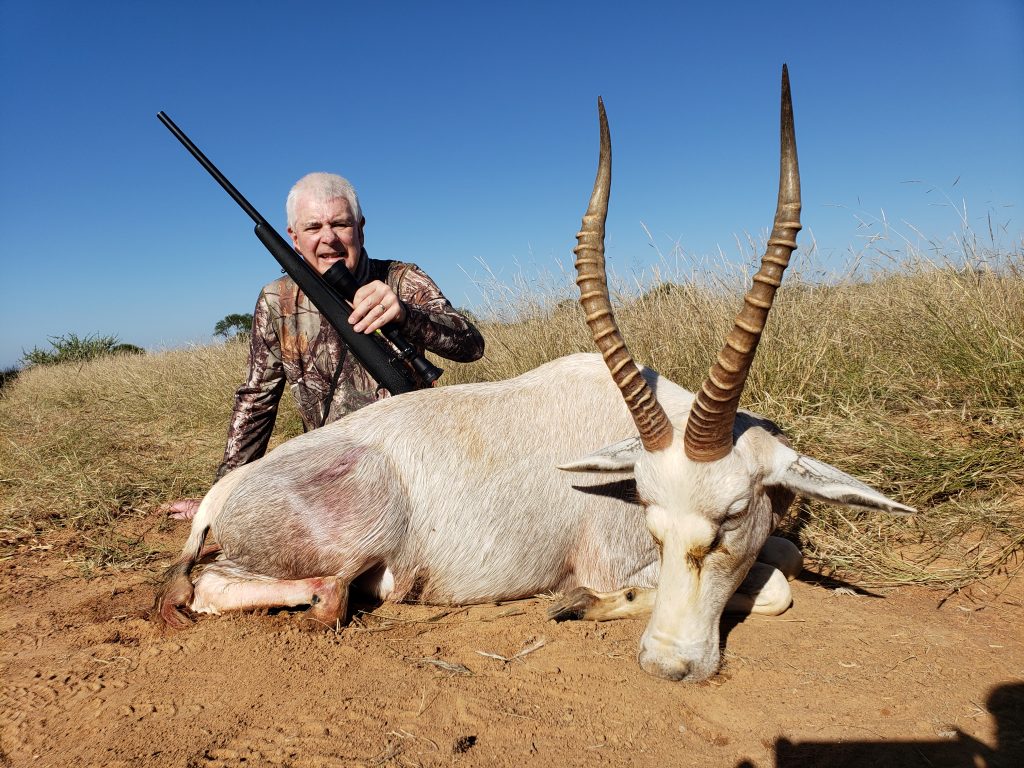 None of the professional hunters had ever seen one of this size! A classic case of being in the right place at the right time. Imagine the odds of intercepting an animal of this size? What are the chances of me and the animal being alive in the same time period, let alone crossing paths while I was armed, ready, and shooting properly?

Trophy hunting is again being at the right place/right time coupled with enough patience to close the deal. Blesbok must be my calling since the Common blesbok I took in the Northern Cape in 1986 would have been #8 in the SCI record book at that time if it would have been entered.

We were after a gemsbuck and had crawled up to a dry pan that did not have any worth taking and the PH said “Ed shoot that blesbok” I replied I was not interested. He replied, “ Shoot that blesbok!” He looked like he was going to cry so I followed rule # 1 (follow your PH instructions) and collected one of my best hunting mementos!

After collecting a blesbok we decided to try for a bushbuck and understood it would be a challenge. Bushbuck are solitary in nature and perused by slowly still hunting near the Crocodile River which is an adequate name based on the number of crocks spotted sunning on the many sand bars.

The terrain is very rough with thick brush and much to the bushbuck’s advantage. Another hunter in our camp had recently shot a nice one after hunting nearly four full days in the same area.

Starting at daylight we gave it a try and per my partner’s whiz-bang watch we exceeded 10,000 steps and burnt over 800 calories but that did not take into consideration how rough those steps were! We heard one “bark” of a spooked bushbuck but never spotted it. Since we were tired and thirsty, professional hunter, Eric du Plessis, suggested we grab a cold drink and chair from the truck and set up adjacent a plowed field that bordered thick brush. We hoped to spot a warthog moving through the area which I thought would be unlikely. A chair and cold drink however sounded pretty good after the morning hike and I readily agreed with the plan.

I got comfortable and set up the trigger sticks just in case, opened my orange Fanta and took a drink. Within minutes I looked up and could not believe my eyes. For the love of Peter Hathaway Capstick, a heck of a big bushbuck ram was walking the edge of the brush directly to us!

Eric whispered, “shoot that bushbuck” but I was way ahead of him already setting the Fanta on the ground, picking up my rifle, placing it on the trigger sticks, and dropping the walking bushbuck in its tracks! Talk about a “what just happened” moment! It was the kind of shot that makes hunters sleep peacefully, which is exactly what I did for a couple of hours right after a delicious lunch! 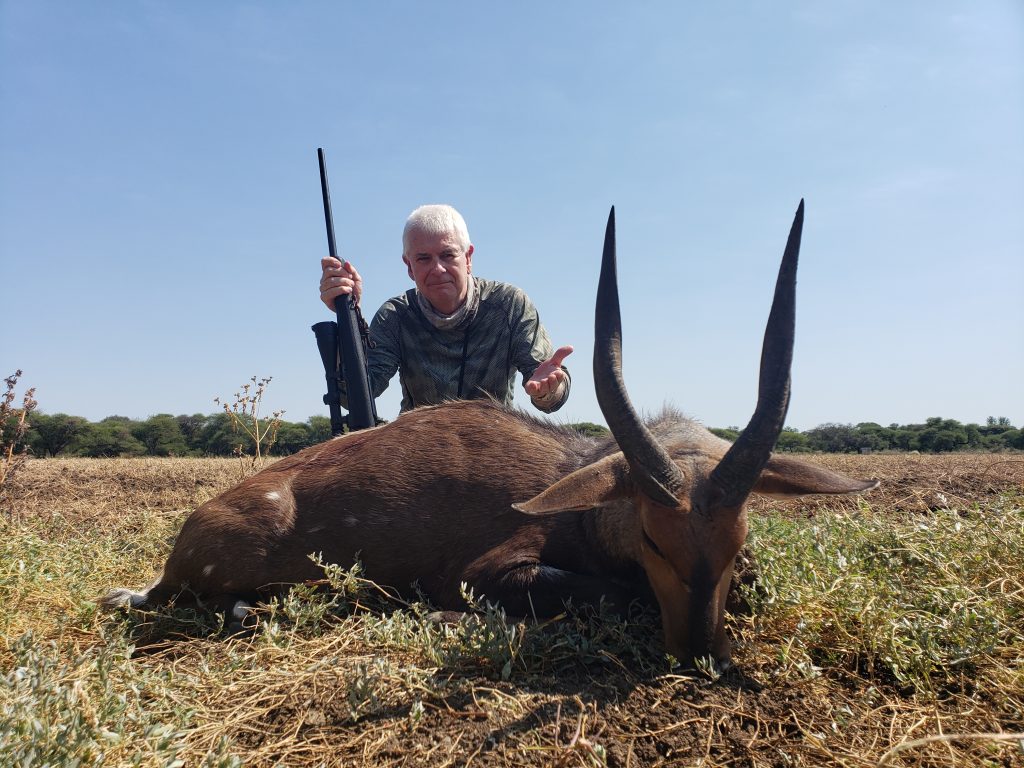 I’m sure by the end of the trip the camps PH’s got tired of hearing about my suggested and highly successful technique of hunting bushbuck from a lawn chair while drinking a Fanta! The animals included in the donation were successfully taken as well. The zebra took a 140 grain Federal Trophy Bonder Bear Claw through the shoulder and lungs and piled up within 100 yards and left a blood trail even I could easily follow.

I wanted to leave the large warthog boars for someone that does not have one and wanted one to eat. The camp chef promised he would cook up breaded warthog cutlets if I could bring in a dry sow which I did and the meal was well enjoyed by all. 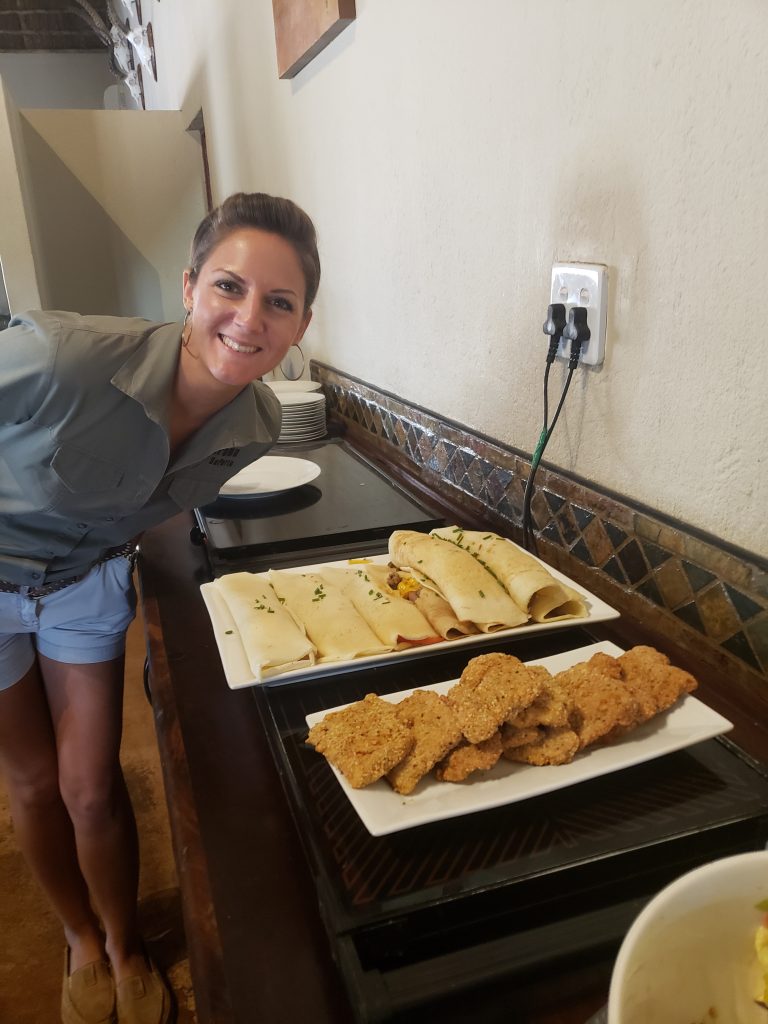 Archery. Camp mate Tim Koetting came with the plan to take a Cape buffalo with archery tackle and he did just that!

Equipped with a Hoyt bow set at 70#, Iron Will 200 grain 2 blade broadheads, and 700-grain FMJ aluminum core graphite arrows he was well equipped and compliant with the South Africa dangerous game regulations for archery equipment.

During the 1st day in the bush, a big buff was spotted and the right wind and good cover allowed them to work within rifle range. The PH then pulled out a grunt call and pulled the bull in for a 22-yard shot. The arrow penetrated to its fletching and the bull ran a short distance and bedded down. A few minutes later the death bellow buffalo are known for was heard and recorded on Tim’s phone. How cool is that!
Using the same equipment, Tim also collected several species of plains game hunting from archery-specific blinds. John Blakley also hunted with a bow and was able to put two arrows into a bull but had us finish the hunt using a .375 H&H. He was successful in collecting a really nice kudu while hunting from a bow blind. 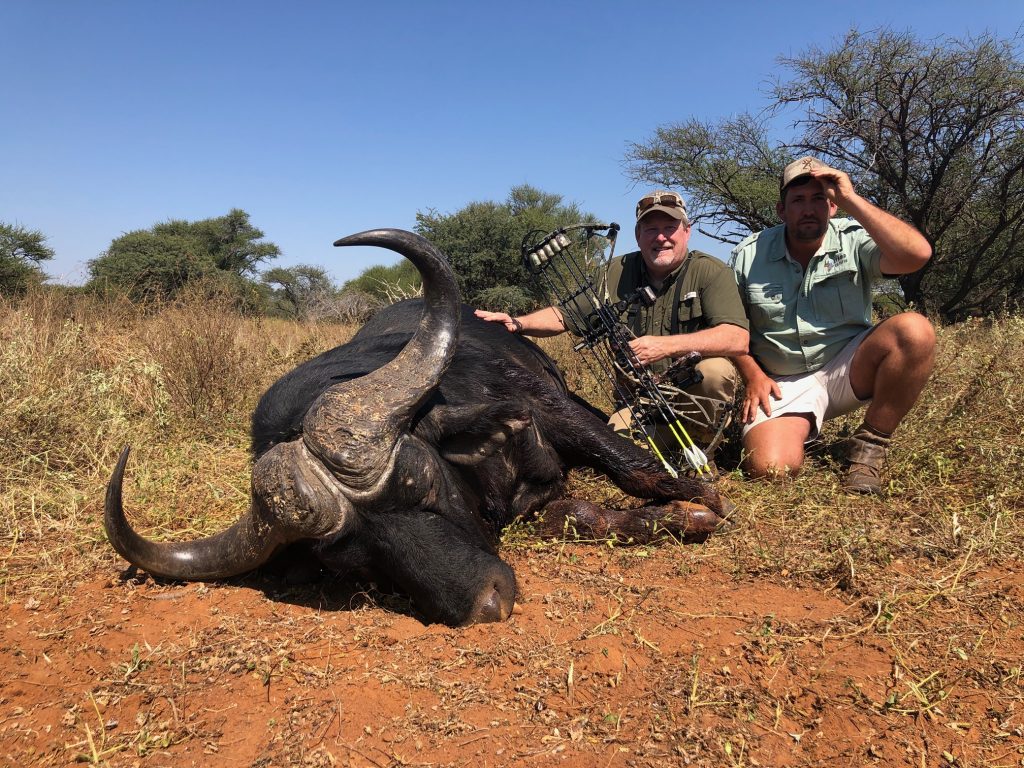 Slugging it out on Safari

My neighbor and partner this trip, Andrei Radulescu, experienced his 1st African hunt, and what an experience it was! His previous hunting experience was in southern Michigan hunting whitetail deer using a slug gun. His decision to hunt several plains game species with his familiar slug gun was a good one. A Mossberg 12 gauge rifled barrel bolt action with a 3-9 scope shooting Hornady 300-grain solid copper sabot slugs at 2000 FPS out the muzzle. This setup worked fine for the close shot opportunities and he made one-shot kills on a big old warthog boar, impala ram, and nyala ewe cull. A Blue wildebeest required a follow-up finisher after a tracking job that was easy due to a good blood trail. An odd choice for safari hunting but proved once again confidence and familiarity with your equipment equal success!

The 2020 season came to a halt early in the season due to the countries Covid-19 forced border closure. All of the camp staff were as excited to have clients start the 2021 season as we were to make the trip! Meeting and getting to know new people in camp is always enjoyable due to our common bonds and this group could not have been more congenial.

Campmates included John and Diane Kotula of Valdes, Alaska, Steve Weast of Richmond, Virginia, John Blakley, and Tim Koetting of Amarillo, Texas. All good people and of course SCI members. It was a privilege and fun to share camp with this diverse cast of characters!

Everyone on the Limcroma staff was friendly, helpful, and professional in all aspects. The professional hunters took turns asking for a blessing at every meal which was greatly appreciated.

At this time a negative Covid test report is required 72 hours before departure from the USA and also when returning from South Africa.
Firearm Permits are not as easy to obtain as in the old days. We contracted local assistance with Henry Durrheim see his contact information below. We used him and our permits were ready when we arrived. All we needed to do was provide proof of ownership via US Customs form 4457 and verification of the firearm serial number, made, model, and caliber upon arrival.

Regardless of what airline you will be traveling on, let them know you will be checking a firearm when making flight reservations.
Pack your ammo in a locked box easily accessed in your duffle. My ammo had to be weighted in the check-in process both going over and returning. 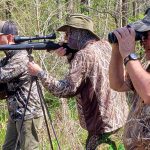 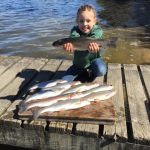