I am always amazed by the way the outdoors brings people together. The generosity of people who hunt and their willingness to support others who enjoy their lifestyle.   -Nick Hoffman

“Smile you SOB”! I knew exactly how Chief Brody felt at the conclusion of the first Jaws movie. A gator I was trying to get a shot at blended in perfectly with the muddy bank and log it was partially behind. My .270 was on the trigger sticks and I willed a slower heartbeat and calmness. I could see an eye of the broadside facing gator but the rest of it was questionable,

Larry Shores whispered, “Take it if you can,” without lowering his binoculars. Thirty yards back my wife Carol and Nick Hoffman of Nick’s Wild Ride Outdoor Channel show were also observing. Shaking like a shaved Chihuahua, I did my best to calm down and aim small.

When the 2020 Safari Club International “Share the Impact” trips came out I definitely wanted to participate. I carefully reviewed the donated trips and picked the hog & gator hunt Larry Shores offered on his Levy County Florida property. Nick Hoffman was my first choice and I was the successful bidder.

I have been blessed to hunt and fish with people from all walks of life, but never a musician – Nick’s highly successful day job. As a fan of his show and YouTube channel, I was all in. Nick obviously likes many types of hunting, diverse food, and having a good time regardless of the hunt outcome. what impresses me the most is his ability to admit when he messes up and laughs at himself, and most importantly, he likes coffee!

Larry Shores’ property exceeds 700 acres and much of it probably has not changed since the “New World” was discovered. Dark gator and snake-infested marshland a person could easily disappear! Pinewoods, grass fields, and food plots make up the balance, and deer, hogs, and turkeys are plentiful.

My first night on the stand was action-packed. It started with a pair of big Osceola gobblers that picked their way within 30 yards and were followed by many deer all afternoon. Before darkness set in a sounder of hogs emerged from the woods. I gave them a few minutes to spread out before chambering a round and getting in position for a shot. My rest was solid and the crosshairs were motionless when I pulled the trigger. I’m conditioned to cycle the bolt immediately after the bullet leaves the barrel just in case second helpings are necessary. I held the crosshairs on the downed hog for about 30 seconds but it was definitely down for the count. 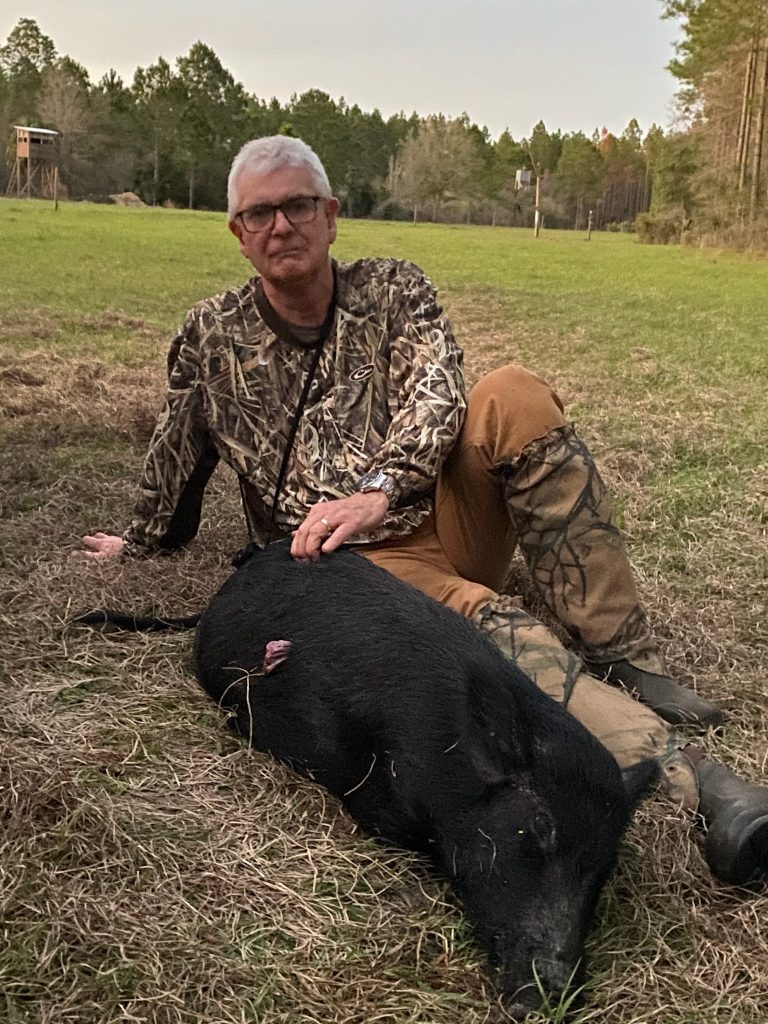 My plan was to be one and done with hogs this trip but Larry wanted more removed. He encouraged me to try his suppressed .308 with thermal imaging scope. A night hunt was easy since Larry has his trail camera programmed to send pictures to his cell phone. After dinner, a picture came in of a big hog so we quickly left the lodge and did a downwind stalk. I set up the trigger sticks and shot the hog! Seeing a black hog as white as a sheet on a dark night was strange but certainly effective and often times necessary due to hogs being highly nocturnal. 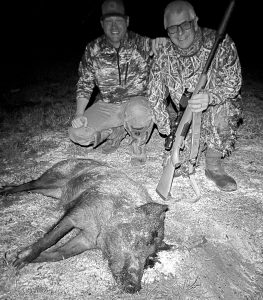 Gators are More of a Challenge

Hogs came easy but gators were a challenge due to continual high water. Since a bad storm hit the area in November 2020 and continued above-average rainfall has resulted in limited access to many of the ponds and ditches normally hunted. Most of the gator hunting is spot and stalk which really makes the hunt challenging. But that is why it is called hunting and not shooting. I enjoyed the challenge of spotting and getting within range.

When we finally got set up on the trigger sticks my heart was jackhammering and the crosshairs were moving in equal harmonics. The fear of failure set in that I would blow it in front of three spectators. The prickle of fear constantly stabbing me like the fibers of cheap undergarments!

I somehow calmed down, the crosshairs settled, the rifle went boom, the gator flipped over, and the cheering started!

Many of the donations were a multiple-party effort and we need to be thankful for every doner!

My hunt took a considerable amount of coordination to make it happen:

Nick Hoffman donated the most valuable resource a person has: HIS TIME. Especially during a busy filming schedule for his upcoming shows. He has also been in the process of starting a new music venture. Check out his website for further information.

Larry Shores donated the use of his property, his time, and made sure everything went smooth and comfortable. He hired a professional chef to prepare four-course delicious and somewhat exotic dinners. One night we had frog legs for appetizers and on another, we had bacon-wrapped quail breast bites. How cool it that!

I invested in the hunt and received the dividends of enjoying my passion while supporting a very worthwhile cause. 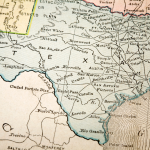 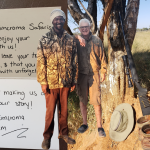