After eight days of 10-mile hikes, a bull stood broadside 150 yards away alerted but not spooked. The crosshairs settled on the elk’s shoulder in the rat gray light of dusk. As the old saying goes, it was definitely crunch time!

Michigan Elk Past and Present

Native elk disappeared from the state in approximately 1875. A modest introduction of seven western elk was successfully released in the north-central region of the lower peninsula near the town of Wolverine. It grew steadily for the next 40 years to a herd exceeding 1500 in the early 1960s. The first limited hunting seasons occurred in 1964 and 1965.

In the late 1960s, reduced habitat quality kept the herd below its growth potential, and poaching added to the decline. The population dropped to approximately 200 by 1975. A renewed interest to better manage the elk started in the late 1970s. Efforts to reduce poaching, habitat improvement, and careful management of the oil and gas development in the area resulted in the herd increasing to approximately 850 by 1984 and a controlled season opened. An elk season has been in place since then and a management plan to maintain a population of approximately 800 animals with a continued focus to:

Hunt #1: Consisted of three (4) day periods between September 1st and October 5th. This allowed for 30 licenses of any elk and 70 cow licenses. 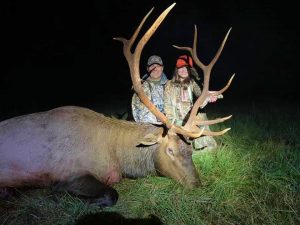 SCI Lansing Board Member Cliff Hart applied for all six of his family members, knowing the chances of ever drawing a tag was less than 1%. However, 2020 brought a pleasant surprise. When he checked the DNR website for the successful applicants he found his daughter, Madison, was drawn for one of the highly coveted 30 any elk tags for season #1. Due to the unique opportunity, the “any elk” was going to be “the elk.”Cliff hired local guides Dan & Scott Connell and he would be along to observe.

Madison was at the end of her final semester at Western Michigan University and the virtual/independent class time would allow for ample time to hunt. The Hart’s own a cabin near Gaylord which provided lodging near the hunting area.

Madison is an experienced hunter, having hunted deer in Michigan and has also hunted in Argentina and New Zealand.  Therefore, she is familiar with selective hunting. She decided to sit out the 1st hunt period in September, opting for the cooler weather. Unfortunately, a suitable bull was not found in the 2nd four-day stretch in spite of the strenuous effort.

The next four days were nearly a repeat, right up to the last minutes of shooting time. Big game hunting success often occurs in seconds and this hunt was no exception.

A big bull was spotted and within seconds the 300 Weatherby magnum BOOM was no doubt heard through the woods! The slap of the 180 grain Barnes bullet finding purchase echoed back before the bull dropped on the spot with broken shoulders. A follow-up neck shot and it was time to take pictures of an elk of a lifetime and a priceless graduation gift!

A typical western elk hunt involves a lot of work once the elk is down. There is still much work on a Michigan hunt but in much more favorable terrain. The elk needs to be reported to the DNR and an officer comes to the site and makes harvest records before the elk can be moved. The guides work together and several others volunteered showed up to help remove the elk.

Elk hunting in Michigan is a memorable experience and the local guides work together as a brotherhood to help each other any way they can. There is a bond with hunters around the globe but never more obvious than in the woods of the Michigan elk season.

A big congrats to Madison from SCI Lansing Chapter!