Youth Hunt was a disappointment

A friend of mine from Chelsea Rod and Gun club, Mike, owns a chunk of land in the Waterloo, MI area. I asked if I could take the kids hunting there and he agreed. We hunted there for the first time during the early youth season in September.  Mike, said that he had seen 17 deer in the hay field including 3 big bucks. There is an elevated hunting blind on the southern edge of the hay field that we hunted in. We saw deer every sit.  However, only small does and fawns came into shooting range.  My son, Bronson Jr., chose to pass the small does and wait for a bigger doe or buck- which never showed during the youth season. 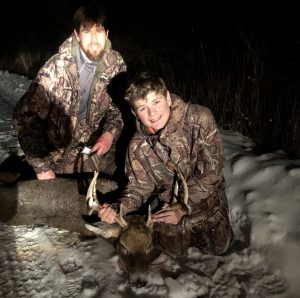 It was Muzzle loader season on Dec. 16th. There was 8″ of fresh snow on the ground, the temp was around 28 degrees.  Mike gave us the green light to hunt. We got into the stand late, almost 4:00 pm. By 4:20 I could see deer deep in the hardwoods making their way to the hay field. The first small doe entered the hay field at 4:30. She moved slowly, feeding to the south.

The small doe was in heat … the second rut. As she moved a little south, the large buck would watch and move south as well.  Two other does entered the field. At one point, the buck put his head down and postured aggressively, backing the does away.  Then he turned his attention back to the small doe.

The buck had entered the field at 144 yards from the west edge of the field. Bronson Jr. had practiced at 100 yards. The gun is right on at 100. I was hoping the doe would work east and pull the buck within 80 yards or less. She didn’t cooperate. She continued to feed to the south west corner of the field, she was on her way to leaving the property to the south and the big buck was 10 yards behind her.

I ranged him at 134 yards now. He was facing us. I told Bronson Jr. we had to shoot when he turned broadside. He fed on the frozen alfalfa for a couple minutes before turning toward the small doe I told Bronson to get ready for the shot. The buck quickly faced us again, I said “shoot” out of frustration then said “NO, don’t shoot” – he laughed a little and said, “I knew what you meant”.

A few moments later the buck turned South again and stood like a statue, broadside. “Now is your chance, take the shot!” I covered my ears and watch closely. The Muzzle loader fired and before the smoke blocked my vision I saw the buck jump and give a mule kick. I was sure he hit him, but not sure how well. I could see the deer run through the woods back to where he had come from.

Now we could see the other deer in the field running in the woods as well as a dozen more that had not yet entered the field. I was able to see the buck run out of site in the woods.  I watched him run over 150 yards- I was concerned at that point, he would have been down within sight with a heart or lung shot.

We got down after 10 minutes and went to where the buck was standing. It didn’t take long to find blood on the fresh snow. The blood was in drips, not as heavy as I like to see. I tracked the buck 20 yards finding several drips and specks of blood. It was a little after 5:00 now. I decided we needed to back out and give this deer time. We got good flash lights and warmed up at home. Lana wanted to help track, she has helped track before and did a good job. We took up the track again at 7:30. The drips and specks of blood continued. The buck’s tracks were a 1/3 larger than the other deer. When I couldn’t find blood, I was able to follow the tracks. The buck was also a little unstable. He was kicking up dirt and top soil with his tracks- the other deer did not kick up dirt.

I also noticed when we had a hard time finding blood to closely check the tracks, blood was found near and sometimes in the track. There are no more drips, only specks of blood now. The trail would Y, Lana would cautiously go one way and me the other while Bronson Jr. stayed on the last confirmed blood. On several occasions Lana would excitedly report that she found blood. Both Lana and Bronson learned to walk on the side of the tracks so they did not step on them or other deer signs. They patiently stayed behind me as I slowly followed the trail. We had tracked the deer over a quarter mile when the tracks led into a cattail swamp. We went 20 yards into the swamp when I saw the buck up ahead. He was 40-50 yards, I didn’t know if he was standing or laying down. The buck ran off. Back into the hardwoods. We continued to follow the track. The blood trail was heavier now. The tracks were easy to follow with no other deer tracks to throw us off. The deer ran back though the hardwoods, passed the hay field, walked within 40 yards from where we parked, then walked onto the neighboring property leaving good sign.

I called Mike to let him know what was going on. He called his neighbors and got permission to track the deer. We tracked the buck through a thicket and into another hardwoods area. The tracks started to lead down into another swamp. The ground was soft and wet under the snow. As we neared the edge of the swamp I saw the buck up ahead. He was laying down now. We cautiously approached and found him expired.  It was a moment of excitement and solemn reverence for a buck that fought hard to elude us.

We had to drag the buck 250 yards. First, we tried a large snow sled. The large bodied deer crushed the sides of the sled. The snow was too deep. The rope on the sled broke after only a few yards. I gutted the buck to make him lighter. Now, with everything we had, we could drag the deer 20 yards before needing a break to fight off the heart attack. Eventually we made our way to a point where Mike could pick us up in the truck.

Maybe I shouldn’t have let him shoot that far, but I did, and we didn’t give up. The venison would not go to waste. I am sure that my son had learned a few lessons about hunting, marksmanship, tracking and diligence. I know that we made a memory that will last a few lifetimes.

The buck weighed 185 dressed and after hanging for a couple days. The taxidermist aged him at 2.5 years old which was surprising compared to the antler mass.  The neck was 22″ around and was the largest neck the taxidermist had had brought in this year.

If you are interested in learning more about what SCI does for hunters in the Lansing area, click here.

SCI is a hunters’ advocacy group that concentrates on conservationist and education. 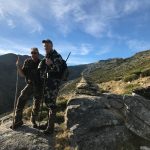