March Hunting Madness in the Glades 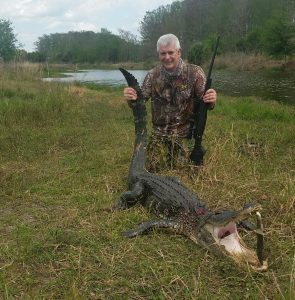 March hunting for hog & gator in Florida proved to be a perfect winter getaway!

It was time for some March hunting! An early morning nonstop Delta flight from Detroit to Fort Meyers smoothly landed in time for my wife Carol, and I to drive over to Townsend & Sons Outfitters in La Belle, FL for an evening hog hunt.

The Townsend family has access to over 400,000 acres of prime hunting land just west of Lake Okeechobee for hogs, gators, and turkey. Hogs behave similar to deer and mainly move at night and are normally spotted at dawn and dusk. A close by cattle ranch with a good population of free range feral hogs was available to hunt the evening of our arrival.

The strategy was to ride around and hopefully spot and stalk.  If that did not prove successful, a blind near a feeder would be our option the last hour of light.

About the time we were thinking about going to the blind three hogs were spotted mixed in with a bunch of cows. We parked behind a palmetto grove and started a stalk. It did not look promising at first, as we had to get past several groups of cows which started to run around as soon as they spotted us. The pigs spooked and slid under the barbed wire fence into the next field which had a small island of palmetto less than 100 yards away.

Thinking they may have stopped there I eased up and rested my rifle on a fence post. Within a few minutes a hog was spotted in the palmetto but head on in the brush so there was no shot. Having been in this situation with hogs before I knew a shot may come if I remained calm and did not move. The standoff was short and as soon he turned broadside and stepped out, a 140 grain Bear Claw was put through his rib cage.

The shot spooked the other two out of hiding and they nearly ran me over heading back in the direction we initially spotted them. My pig did his best to follow his mates but went down within 30 yards.

At a little under 90 pounds he was no trophy but a perfect size for whole-hog sausage!

The scream was low at first, more a cry of surprise than pain, then turned into a piercing shriek. Once again even higher, a wail not heard since it was now taking place under water.

The evening started out bad for the 22 year old man that was looking for a house to break into. A police cruiser sent him running and his black jeans and hooded sweatshirt allowed his escape into a Florida suburb wetland. Thinking he was safe, he settled into a comfortable flat spot surrounded by vegetation. He would find out soon he was smack in the territory of a very large gator.

The first bite nearly severed his foot and the second clamped down so tight it crushed his tibia. The gator had enough of the squirming and pulled him into a deep hole and rolled several times quickly killing his catch in the tepid black water.

Ten days later the remains were spotted but the gator had to be killed to allow recovery.

My better half made it perfectly clear before the trip she was deathly afraid of gators. However, she said she would keep an open mind regardless of the recent gator related deaths that have been in the news. She’s seen enough  flopping gator mayhem on the TV series Swamp People.

The typical method of catching a gator is on a baited trot line that is dispatched boat side. However, the Townsend fellows perfected a technique that adds more challenge to the hunt.

Instead, they use a big Penn saltwater spinning rig with 150# no stretch braided line and a weighted treble hook of ample size. We each had a rig to cast into the many interconnecting ponds and ditches. We were trying to blind snag a gator. Once a gator was snagged the pole would be handed off to me and I would fight it. It was similar to hooking  a really big fish. They explained that it was important not to pull to hard or the hook would bend and it would likely come loose if any slack was allowed in the line.

In many cases the hunter wants nothing to do with this and stands by and shoots after the guide fights the gator. Having fished for marlin, tuna, and halibut on fairly light standup equipment I wanted to give it a try.

We discussed shot placement and since I wanted to have the skull European mounted, a head shot was out so we decided a shot just behind the head in the spine would do the trick. After our hunt orientation Carol remarked a snagged gator was going to be really mad…She was not wrong!

The hunt proceeded as planned in some of the most exotic and beautiful country I have ever visited. Many gators 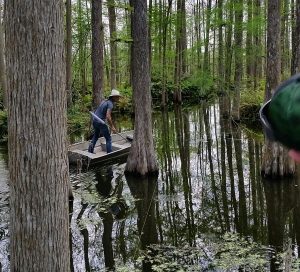 were spotted in and out of the water and all were very spooky.

About the time I was starting to question if this technique would work a line came tight and the fight was on. I took a firm stance and braced my elbows tight against my ribs to keep my arms from being pulled out of their sockets! Keeping the rod parallel I watched line peel off the big Penn. Once the gator settled down it was pull back / reel down gaining line inches at a time. This went on for about 15 minutes until the gator did not like being close to shore and took off in a blistering run and the fight started over again. This sequence repeated several more times with the gator taking less line each run and was slowing down.

I traded the rod for my rifle and cycled a round into the old Ruger. Daniel Townsend took the rod and pulled up and the gator became visible above the water line. Daniel asked if I could see the shot placement spot we discussed the night before. Boom! was the unspoken reply. The old 270 had taken its 29th specie and we pulled the gator up on the bank. I was physically whipped and had to sit down a while before taking pictures, it had been quite a morning!

Gators have a reputation of being dangerous when “fresh dead” due to nerves causing sudden movement. That is why you either tape the jaws closed or prop them open with a bottle, can, or big knife as we did. After a short rest we set up for pictures. One picture they recommended was for me to get behind the gator and place its tail on my shoulder which best displays the length. Just before the camera clicked the tail nerves took effect and knocked me over. It was like an old comedy movies when someone is tied in a chair and they try to move and fall on their side. We set up again and after obtaining some good pictures called it a day.

Townsend & Sons provides great service for hunters and make sure observers have a good time as well.

They have lodging and meat processing (actually process for other guides in the area) on site and we took advantage of both and highly recommend them. Call 863.517.4787 or go online for additional information.

If you are interested in learning more about SCI and having the opportunity to go on hunts like Ed Edwards described, we’d be happy to talk to you about membership.

We started the Lansing Area Chapter in the year 2000 and we now have grown to nearly 500 members. If you share an avid commitment to hunting and conservation, and support protecting our rights as hunters, we invite you to join us. 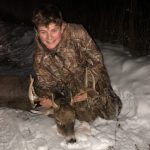