In my opinion, stand hunting whitetail can be one of the most mentally demanding activities a person can put themselves through.

What do hunters think about during all that quiet time in the woods?

Proper clothing and nutrition will take care of you physically, but mental alertness for hours on end is up to you. Some like to read or fiddle with their phones while on stand. But for me it is time for deep thought. Common thoughts that often run through my mind include:

Sometimes the thoughts are not so common, as happened on the stand during a recent hunt in Kansas. We had just received permission to hunt a property and it had the only heavy cover within several square miles of very flat land consisting of pasture, milo, and spring wheat just starting to green up.

Walking back to the tree-lined dry creek looking for a spot to set up, I quickly noticed it had a lot of buck sign with numerous rubs and the stench of fresh scrapes hung in the cold winter air.

The higher of the banks was on the downwind side and I set up my folding chair next to a tree I could lean into with my left shoulder, stuck my shooting stick into the soft soil, and felt quite confident of the spot. The relentless Kansas wind was directly in my face so anything coming down the creek bed or in the picked milo on the other side would not have a clue I was in their sanctuary. Clear shooting lanes were noted and the only concern was if a shot presented itself out in the milo it would be a thread the needle shot.

It was about two o’clock when I settled in and was soon deep into uncommon thoughts. how uncommon? I though about prime numbers and I have never been any type of math teacher!

If you never knew or have forgotten, a prime number can only be divided without a remainder by itself and one. Facts that are interesting (or not) include:

I Spot the Whitetail

I was mentally clicking off prime numbers: 2, 3, 5, 7, 11, 13, 17, 19, 23, 29 and immediately changed by thoughts to the whitetail deer running across the milo field. A quick scan indicated the first two were does, the third was a small buck, and the fourth was a horse of a buck! I placed my custom 270 on the shooting stick, closed the bolt, and hoped he would stop in one of the two shooting lanes in front of me.

They all skirted around the first spot and all but the big boy blew through the second. He stopped broadside, the cross hairs settled behind his shoulder and I swear my trigger finger had a 140 grain Bearclaw in motion before my brain told it to do so.

The deep boom-whack of the bullet echoed back and I saw the buck fall forward and not move!

There was no ground shrinkage with this one and my good friend and hunting partner, Tom Quake, was able to drive up to reasonable dragging distance.

Share your hunting story with us! We want to hear it. Either post in the comments below or send it to scilansing@gmail.com. 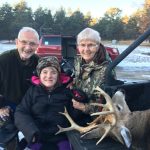