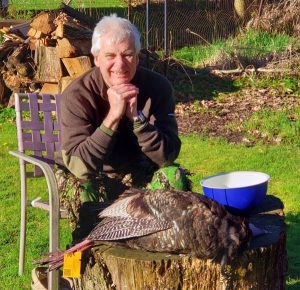 Come on spread out and show me some social distancing! A gobbler was holding tight between two hens and preventing a shot.

If someone told me back in the early 1970’s that Michigan would soon be nearly void of pheasants and a huntable population of turkeys would occur in my lifetime I would have rolled my eyes! Back-to-back severe January storms in 1979 and 1980 took out the pheasants and they have not recovered since.

In the early 1980’s turkeys were released in Southern Michigan and adapted and reproduced so well that a limited turkey hunting season was established within ten years. I remember a release was made south of my hometown of Marshall, MI. The released birds had tracking “chips” so the DNR biologists could monitor the movement and survival rate. One was poached and the remains buried at the edge of the poacher’s garden. The DNR tracked and recovered the chip along with the feathers and bones. The poacher was no doubt extremely embarrassed over that ticket!

The first “turkeys” brought to Europe from the New World were from Ocellated flocks Cortez obtained from birds the Aztecs had domesticated. They were called “turkeys” after the barnyard guinea fowl found in the country of Turkey. The Eastern subspecies the Pilgrims found resisted all efforts at becoming  domesticated, but they were so numerous that it did not matter. Further out in the plains states it was not uncommon to mistake a flock of Merriman’s scratching for seeds for a herd of stampeding larger animals because the flocks were so large.

The Fatal Flaw of the Turkey

The fatal flaw of the turkey is he can be easily shot off the roost after dark and market hunters did this to extreme. Roost shooting combined with trapping and loss of habitat dropped the population quickly. By the mid 1800’s turkeys no longer existed in much of its native range.

Bringing Back the Wild Turkey

During the middle 1900’s efforts were made to bring back the wild turkey, but pen raised birds would not adapt to the wild. Once the methods of trapping and transporting live trapped birds was perfected, the wild gobbler’s call was heard once again through its native range. They also migrated into areas it was never heard before.

Bringing back the wild turkey is one of the most successful wildlife conservation projects in the history of North America. Funding was provided through hunting licenses and taxes on firearms and ammunition. By the early 1990’s a turkey hunting season was established in nearly every state!

“You cannot put to much brush on a blind.”

Even though Mr. Duck Commander was referring to a duck blind it also applies to a turkey blind. The properties I hunt are not big enough for the run & gun techniques so often touted in magazines and outdoor shows. The brush blind I have hunted out of in recent years allows me to sit in comfort for long periods. I try to be set up by 6 AM and have killed as early as 7am and as late a 1 o’clock. Comfort allows patience and combined with good snacks makes for an enjoyable experience. 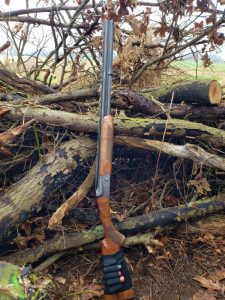 Time on stand gives me time to think about previous hunts. I will always remember turkey hunting on May 6, 2010. The hunt was as straightforward as could be expected. A big gobbler came to my call and decoy in full display without hesitation. At about 7:30 he was within range and a load of Hevi-Shot 5’s did the job. Since I finished the hunt so early, I considered that with a little rushing around I could be in my office by 10 o’clock and finish up some work.

Once on the road I changed my mind and decided to visit my parents instead. As always they were excited about my success and I sat with my jovial 91 year old dad as we drank coffee and visited for several hours. That afternoon dad died while puttering around the yard and had I not changed my plans and taken the time to visit I would have regretted it the rest of my life.

May 1, 2020 I was in my blind practicing social distancing. At about 7 o’clock I was eating my PBJ sandwich breakfast and three turkeys came running in and stopped and stared at my decoy with the “do we know you” look. After a few minutes they relaxed and separated. Click-Bang-Flop and my 2020 turkey hunting was in the bag . I was as happy as a clam in wet sand!

Tips for Cooking a Wild Turkey

I have frequently heard “got a turkey and it was tough and or dried out when cooked.”

Here is what works for me.

Season and brown one package of breast meat in an oven safe pot. After browning add a can of tomatoes (any type) or 4-5 fresh ones and bake at 225 F until the meat can be pulled apart with a fork (normally 4-6 hours).  Discard the tomatoes and prepare as follows:

Mix the meat, soup, and noodles in a well coated 9 X 13 pan well coated with cooking oil. Sprinkle the bread crumbs, then the cheese. Cover and keep in the fridge overnight.

Thigh meat can be slow cooked using the same tomato technique then combine with a boxed rice mix (cajun seasoned is great). Serve with whole grain dipping chips with salsa and sour cream or plain yogurt for toppings.

Alternate meat: duck or goose breast. I have served this at several gatherings and was asked how the flavor of the beef was obtained!

Wrap the kill tag around the beard.

Place the beard / kill tag in the shell used.

Makes an interesting display and you will know what date and shell was used!

In summary wild turkeys are fun to hunt and delicious to eat! Try turkey hunting this year! 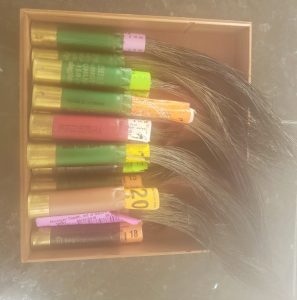 Safari Club International is the leading voice in the fight to protect the freedom to hunt, both in the United States and internationally. The SCI Departments of Legal Advocacy Resources and International Affairs and Government Relations are headquartered in Washington, D.C., advocating on behalf of SCI members and non-members alike. From staff dedicated to legislation and policy to a team of litigators, SCI hunter advocacy is at the forefront of protecting the hunting heritage. SCI and the SCI Foundation provide the voice of the hunter in treaties that affect hunting and wildlife conservation worldwide. This is where SCI and SCI Foundation go beyond what other hunter organizations do and why their work in this arena is critical to preserving the right to hunt.  Plus, we have lots of fun and many more stories to tell like this one.

To find out more information about SCI and joining our Lansing chapter, click below: 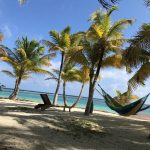 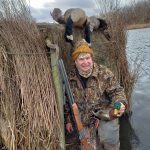