I’m often asked when does the hunting season start? An interesting question with many possible answers and for me 2021 already has a good start!

The dictionary has three definitions of a “season”. Two define weather changes and another being a recurrent period characterized by certain occurrences which fit the hunting seasons set by federal and state governments.

When I started hunting in the early 1960s there were two main seasons in Michigan that were carved in stone.

Small game October 20 through November 10th. Pheasants were common in those days and many hunting families had a “bird dog” such as a pointer, setter, spaniel, and some used dual-purpose breeds such as hounds and retrievers. Those that did not hunt pheasants headed to woodlots in search of squirrels during that same time period.

Deer November 15 -30th. Deer were scarce in Southern Michigan in those days but those willing to take their 30-30 &Woolrich coat and go “up north” had pretty good success. 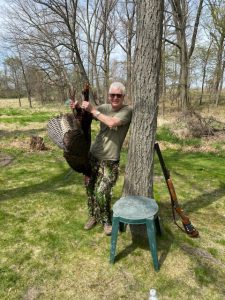 Fast forward 6 decades and the answer based on licenses I purchase starts with turkey (which did not exist in Michigan when I started hunting) in late April and runs through May. In my opinion, turkey hunting success depends on scouting, set-up, and patience.

April 27, 2021, I was in my blind in an area that had proven successful during past seasons and the landowner had sighted turkeys nearly daily. A comfortable bag chair and good snacks would go a long way in keeping me from seeking other entertainment. Honestly, who enjoys being uncomfortable and hungry if they can avoid it?

Being set up and comfortable before daylight I had nothing to do but wait for the rotation of the earth and legal shooting time. About an hour later two big gobblers came out of the woods in full display following two hens and paid no attention to my decoy or calls. One of the gobblers had a “broken fan” missing a few tail feathers and had a loose one blowing in the wind. The hens were traveling with a purpose and might as well had the gobblers on a leash.

The next three hours passed without and turkey activity and a challenge to stay awake and focused, but I’m glad I did! At 10:15 I looked to my right and two gobblers came over a rise and were less than 40 yards away and coming like they were racing each other. They picked up movement and froze at 14 yards ready to spook but hesitated long enough for me to aim, fire, and drop what turned out to be an old broken fan like a popped balloon with a load of Federal #4 Black Cloud “close range” steel shot a good ammo choice to have in the upper barrel of my old SKB for sneak in close range shots. Once again patience was the key to successfully starting the 2021 season!

Health allowing and God willing the season will progress and good fellowship, exercise, and meat for the freezer will come from my fall waterfowl, deer, and hopefully hog hunts. 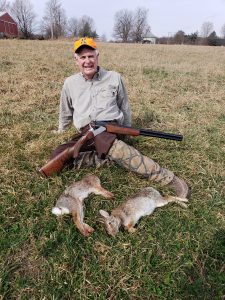 By license and game laws my 2021 season will end March 31, 2022, hopefully with a few cottontail rabbits. Michigan rabbit season starts September 15th and runs through March of the following year and my favorite time to hunt them is in March when winter weather is winding down and spring is close to starting.

Rabbit hunting is fun, good exercise, and requires minimum equipment. Best of all rabbits inhabit a variety of land types and can be done without seeing another hunter. Landowners are more likely to allow rabbit hunters access than other species of game.

Jumped rabbits can be a challenging target! It’s not what you hit them with that matters, it’s just hitting them in the first place. A cottontail cannot approach the speed of a game bird in flight but its advantage of being earthbound is huge. They can start, stop, and zig-zag in ways no bird in the air can, and dart in and out of cover in the blink of an eye.

Most upland bird intended shotguns of any gauge will work perfectly on rabbits and in most of Michigan wild upland birds is a very distant memory. The swales, fence rows, and briar patches rabbits live in are the few places left to take out an old lead-only lightweight shotgun that seldom gets used nowadays.

Rabbits are a great way to introduce youths interested in hunting and let them move about freely in nice weather and they do not have to roll out of bed before dawn!

If it’s your first time, or the first time in a long time, consider finishing your season rabbit hunting! 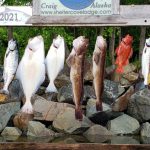 An Alaskan Experience with Eagles, Orcas, and Big FishHunting Stories 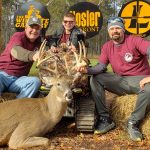