As long as hunting in Africa is available this will be debated. The author’s answer – What is already in your gun safe!

Two things ran through my mind as I found the eland in the scope, clicked off the safety, and squeezed off. 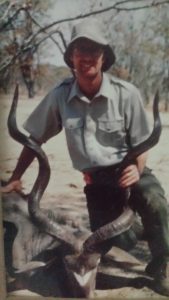 For one, many African PH’s like a .375 H&H be used for eland and earlier in the day I witnessed another hunter put three .300 WM handloads into his eland before it succumbed. Ker-whack! The eland bucked up like a bronc on its back legs and fell on its side kicking its massive hooves in the Kalahari sand. Such a result was due to a very large bore rifle, right? Wrong! Did I pull the shot and spine him? No, wrong again.

The shot placement was exactly as aimed breaking the near shoulder and tearing up its lungs and was done be a 150 grain Nosler Partition from a .270!

I’m glad three others witnessed the shot although after it was over I was not overly surprised by the results. Two days earlier I clobbered a large gemsbuck running and angling to the right. The bullet entered a foot or so forward of its hip and found under its skin behind the far shoulder. At the end of this hunt which took place in two provinces in the Republic of South Africa, the score was six shots-six animals. The game ranging from small-warthog & springbuck, medium-blesbuck & nyala, and large gemsbuck & eland.

Hunting in Africa: Zimbabwe and Botswana

The same rifle was used on earlier hunts in Zimbabwe and Botswana with equal success. With one exception all animals dropped within a few yards if not in their tracks and only a couple required a finisher. The exception occurred on a hot August morning along the Kwando River in Northern Botswana. A big sassaby stood broadside alerted but not spooked. I touched one off and was surprised when he galloped off in the ground covering gait the fastest African hooved animal is noted for. Gut shot! Cecil Riggs, my PH shouted.

A short follow-up found him standing under a tree with his head down and another shot finished the job. Inspecting 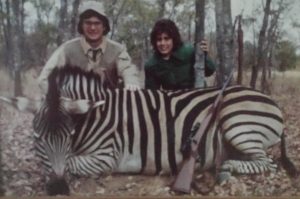 the sassaby I was elated my first shot was not as predicted, both shots were right behind the shoulder and less than two inches apart. The sassaby was dead from the first shot he just didn’t know it!

I read a great deal about hunting in Africa and her game animals and the recommended firearms and ammunition before going over. Many writers touted thirty caliber and larger belted magnums with the warning non-magnum rounds would merely bounce off African game. Two scribes which had nice things to say about standard calibers and both used .270’s in Africa on more than one occasion the late John Jobson and of course Jack O’Conner. Throughout their many articles both advocated shop placement and quality bullets for success.

Planning my first African hunt I wanted to use my .270 and stated so over lunch with the principles of the agency making my arrangements. Too small for anything larger than impala -definitely unacceptable for zebra and kudu. They urged me to take at least a .300 magnum, but I was stubborn and took the .270. 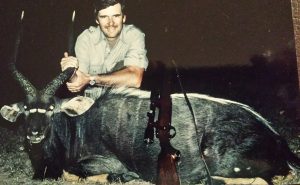 Federal Premium loads with 150 grain Nosler Partitions proved to be deadly dropping zebra and Greater kudu as well as the small stuff with one shot each on that 1982 Zimbabwe hunt.

If you have a .300, .338, or .375 magnum and can shoot it well you are well equipped for hunting in Africa and plains game. If you have a favorite and familiar .270, 7 X 57, 30-06 or something similar by all means use it with a good heavy for caliber premium bullet and enjoy a “hard true life” to quote Robert Ruark.

Strip away all the theory, separate the real from the imagined and one fact will stand out-place the shot in the vitals and it will be all over except for the picture taking!

Check out our blog for more stories like this one from our chapter members.

Interested in finding out more about Safari Club International?

Visit out membership page for more information! We’d love to hear from you and have your visit our next chapter meeting or special event. 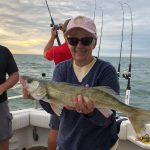 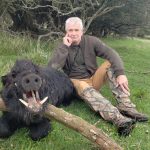 Hunting in Argentina! A great hunting destination with many optionsHunting Stories